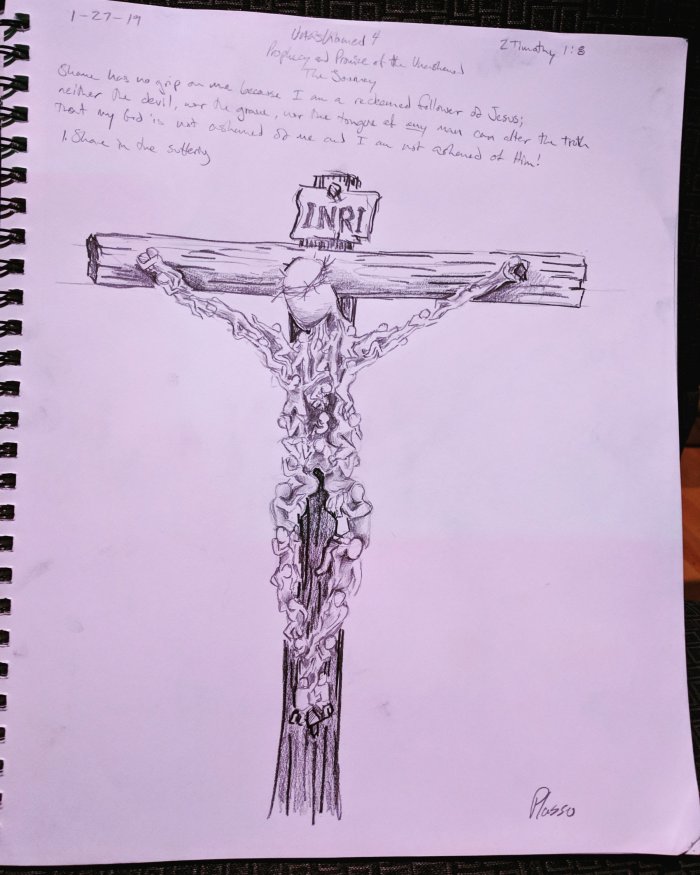 Shame has no grip on me because I am a reclaimed follower of Jesus; neither the devil, nor the grave, nor the tongue of ANY man can alter the truth that my God is not ashamed of me and I am not ashamed of Him.

We are the body of Jesus, we share in the glory, and in the suffering, of following Christ. We become the body by holding each other accountable and supporting each other on this Journey.

The body of Christ is made up of our intertwined and interdependent bodies. The head is clear, because Jesus is the head. Inspited by multiple legislations passed around the United State last week, a fetus is growing in the core of the Christ.

Creative worship in the form of visual art creation has been a goal I’ve focused on for the last seven years or so, since I began keeping a visual journal of drawings spontaneously sketched to capture the message being communicated within sermons. This Easter, during the Good Friday worship service, that dream of expressing devotion through the talents God invested in me and conviction the Holy Spirit presses on me came to life in a divinely orchestrated project, The Triumphant Cross.

The service was arranged into three sections, an opening worship set, delivering the message, then a closing worship set. With careful coordination with the music selection and words of the sermon, the painting evolved throughout the service while I was physically working during the worship music sets that bookend the sermon.

The starting point of the artwork was a stark white panel. White represents purity and innocence, this is the beginning of existence. Standing at the front of the stage, illuminated by spotlights and the thunder of the drum set, the bright presence of the panel on the easel is unavoidable. The panel stands unmoved, silently shouting “I am here, I am part of this”.

Meditating on an image to capture the depth and meaning of Jesus’s traumatic sacrifice on Good Friday, the pain of loss and confusion of burial in a sealed grave during silent Saturday, to the flood of joy and victory on Resurrection Sunday, my spirit was led to focus on the secure hope delivered to us through it all. One of the most secure and reassuring phrases uttered by God throughout the Bible to me is the simple statement of ‘I am’. Those two simple words are a statement of historical fact, present status, and future intent. God was, is, and is to come. This pure white panel simply states, I am.

As the first worship set begins, the white panel comes to life in an array of bright colors. The worship team begins the set with King of My Heart, which is an anthem of hope and security of our life and our worth in Christ. I specifically chose the brightest oil pastels I could find to create a feeling of the work exploding to life. Large, geometrical shapes of colors familiar to Easter and the beginning of spring formed an image styled similarly to a traditional stained-glass window.

The focal point of this drawing took shape of a ‘Christmas Star’. I wanted this shape to take viewer’s minds back to the beginning of Jesus’s life, His humble and beautiful birth and the excitement of realized anticipation of a new king arriving. Full of energy and color, Jesus is alive.

King of My Heart transitioned into No Longer Slaves with a short chorus of ‘God is so Good’. As we sang of rescue and deliverance from fear, I added two small, yellow crosses in the bottom corners of the panel. These crosses rested on two green hills, then a purple hill was added at the base of the star. At this point, I began shading the edges of the star with a drab green-grey. The bland hue fights against the brightness of color used to this point. As I contaminate the image with darker shadows, the star is re-formed into a cross.

The life and energy of the star that dominated the artwork draws back into a symbol of suffering and death, arms overreaching the crosses below where the guilty hung. Life and energy are now mingling with guilt and fear.

At this point, I pick up my paintbrush. None of the original white remains, the purity has been compromised by a mess of color that pushes and pulls against itself.

Reckless Love has been a pivotal song for this Easter season at Journey Church, for our congregation and within our worship team. As my brush travels around the panel, the colorful depiction of the cross is slowly picture-framed by heavy black. Directing my strokes to make the blackness grow, the dark closes in on the cross. Soon, the main cross in the center is the only shape remaining.

As the song leads into the bridge, I fill in rest of the image with intensity until all that remains is solid black. Everything that was once white and pure is now completely opposite, black and heavy.

There’s no shadow You won’t light up

Mountain You won’t climb up

There’s no wall You won’t kick down

Lie You won’t tear down

The life and energy that this image contained has died and is now buried.

The panel is left at this stage while our lead pastor comes to stage and delivers the sermon he prepared. My intent was for the congregation to be left wondering at this point, confused why I would have “ruined” the colorful image I had worked so hard to create by painting it entirely black. I imagine that feeling may come close to the emotion the disciples felt as Jesus was led away by the Roman soldiers. The shock and despair of the hope found in doing life with Jesus, stripped from their foundation by the betrayal of one close to them. Then the anxiety of wondering what is coming next. 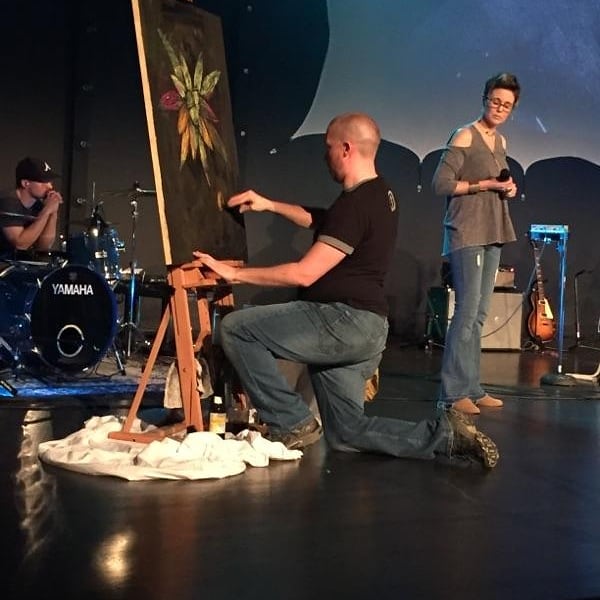 As Michael closes the sermon and invites the congregation to respond, I return to the easel with the worship team on stage. The second worship set kicks off with When You Walk Into the Room and includes worship through communion. I begin working on the next phase of the artwork with as the song begins.

When You walk into the room, everything changes

Darkness starts to tremble at the light that You bring

As we sing these words, I use a knife to cut away the dark paint that buried the bright color. Life is returning with each stroke. I chose to carve blooming flowers out of the blackness. I studied several species of flowers and their traditional meanings while settling on the designs to reference, right up until the moments before I walked back on the stage. The focal point and largest of the flowers I chose is the open bloom of the Edelweiss. The edelweiss flower represents courage and devotion, two of the most predominant characteristics exemplified by Jesus as He laid Himself down without guilt and with the power to free Himself from the entire process. 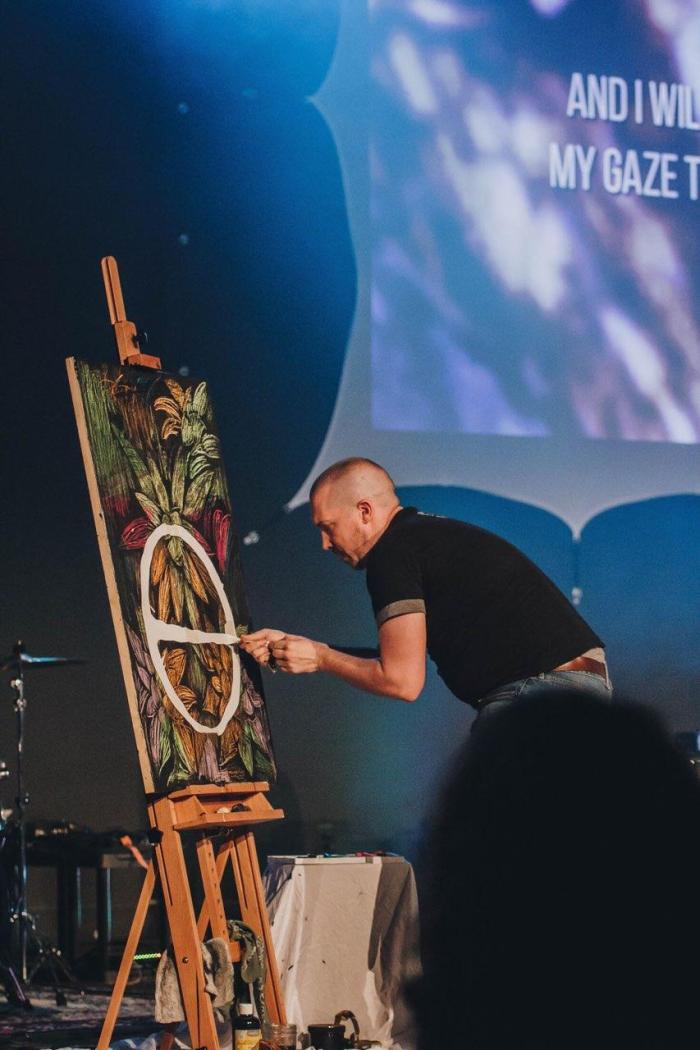 At the moment of Jesus’s death, the veil which separated the majority of humanity from entering the presence of God was torn from top to bottom. This symbolized the destruction of the wall separating us and opened the pathway for everyone to communicated with God on a personal and individual level.

O Praise the Name was the song chosen to finish out our worship for this night and the grand finale for this painting. As a nod back to the tearing of the veil, I dropped the knife and began tearing away a shape I had created with tape and concealed with a last coat of primer.

As I continued to peel off the tape, a historic icon takes shape.

Early in the 11th century, Carthusian monks in England designed an icon we know today as ‘The Triumphant Cross’. This icon was associated with a Latin motto, Stat crux dum volvitur orbis. Translated, this motto and the symbol communicates “The cross is steady while the world is turning”

The circle represents the globe, while the horizontal line symbolizes the equator. The cross rests in the center of the circle, acting as the axis which the world turns on.

All of the colors and contamination are now removed. The innocence and purity are dominant again, standing out brighter than anything else in the image. The cross was present from the very beginning, designed into the perfection of ‘I am.’ We just couldn’t see it until we were on the other side.

The cross is steady while the world is turning