In 1999, Warner Brothers released The Matrix, an American science fiction classic. The story tackles philosophy, sociology, technology, and spirituality; but for today’s drawing we’ll focus in on one aspect; “The One”. In the movie, Thomas Anderson, a.k.a. Neo (Keanu Reeves), is a human living in the Matrix and working as a hacker. He is totally unaware that what he perceives as reality is nothing more than a computer projection created by artificial intelligent machines that took over the planet. A band of rebel humans who escaped the Matrix break Neo back into reality to join their rebellion. The leader of this band believes Neo to be “The One”, the human prophesied as coming to defeat the computers. In the climactic image above, Neo reaches a point of self-realization. He embraces his place in reality and finally grasps the ability to control and manipulate the Matrix to battle the machines. The attitude of embracing one’s place and stepping up to fill your position is at the heart of today’s installment of Man School.

The Matrix is unquestionably a guy flick; technological warfare, big machines, and guns galore. In the climactic scene, Neo stops a flurry of bullets racing toward him by raising his hand. He then defeats the lead villain by diving into his chest and shattering the simulated body into a cloud of computer code. Why guy doesn’t want to cheer and chest-bump his friends when the computer-generated walls start flexing in correlation with Neo’s breathing?! Neo became “The One” by conquering his fears and embracing his position, out of willingness to sacrifice as much as physical ability. Men, we need to step up and be “The One” for our families.

God, our father, provides us guys with an example to follow in fatherhood; a position to embrace. When it comes to fathering us, God is patient (1 Timothy 1:16), He is forgiving when we screw up (Ephesians 1:7, Isaiah 43:25), and his relationship to us is intimate (Luke 15:20, 1 John 3:1, Psalm 68:4). At the core of all these attitudes is love. Men who step up an embrace the role of fatherhood by reflecting God to his children become their hero. Embrace these characteristics with your wife also and you will be “The One” to your family. 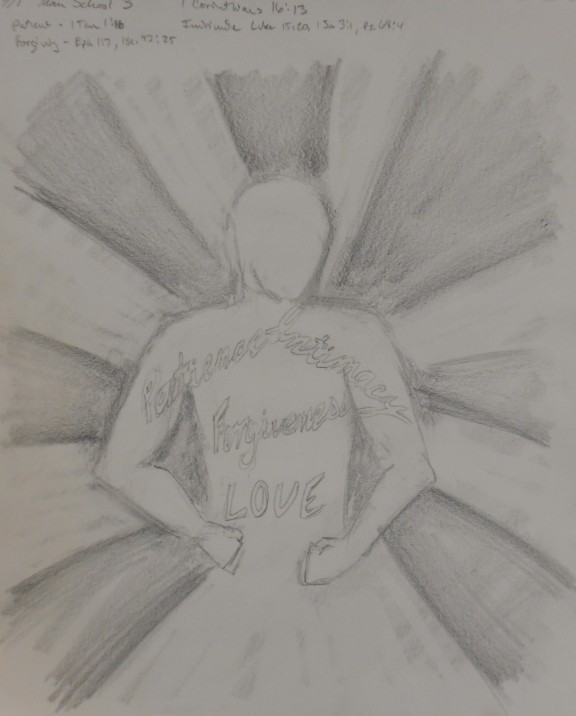 Be on your guard; stand firm in the faith; be courageous; be strong