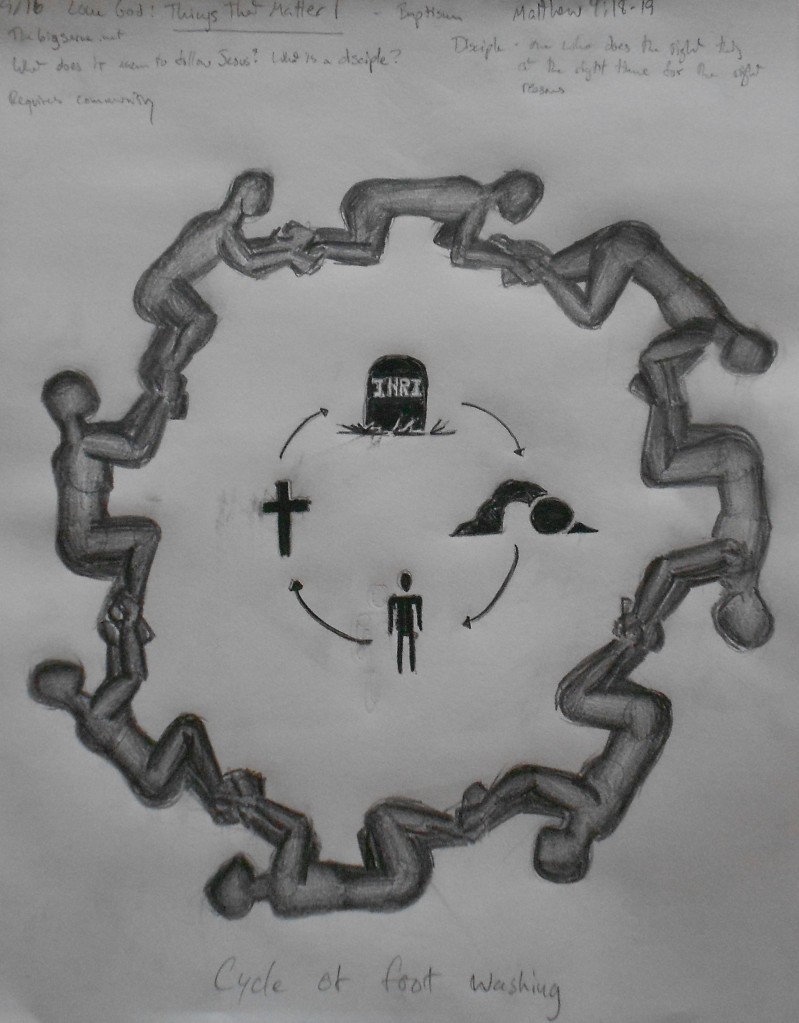 Continuing our re-launch of North Ridge in the start of our fifth year, we began a new series focusing on the essentials of the Christian faith and our mission as a community of believers who want to impact our culture. The next few weeks will follow this theme, series titled; “Things That Matter”. The messages we’ve heard and lessons we’ve learned over the last few weeks lead up into today’s message on our place in the missio dei, discipleship.

Before we can effectively disciple other people, we must first answer a question for ourselves. What does it mean to follow Jesus, to be a disciple?

Jesus calls us to follow Him with others, but also to follow Him for others. Effective discipleship requires community. Community is not defined by assembling for an hour, one day out of the week to listen to hear some music and some encouraging words, community is much more. Living in community happens on a daily basis and requires genuine compassion for people, even in the face of our differences. To live in community is to do life together, supporting each other through difficulties, celebrating victories, and serving the community at every opportunity.

Jesus calls us before we call Him. Cynicism is a learned trait, compassion is a characteristic we naturally contain. Compassion, empathy for the suffering of others, is a fundamental component of human love and is an intricate part of Jesus’s life and the life He calls us to, even before we can comprehend that it is His voice we hear. Jesus calls us in our normal lives, to operate every day in community-building mode, even in during mundane routine. He also calls us out of our normal lives, to take compassion to the next level by reaching out to people and seeing through “life is good” facades.

A disciple of Christ takes living for Him a step further by acknowledging Him as our motivator. Through this acknowledgement, a disciple is obedient to the word of God. We will emulate the morals and habits for living taught by Jesus and recorded in the Bible when we devote ourselves to following Him. In order to obey the word of God, one must know the word of God; meaning disciples study the word of God.

A disciple is responsive to God’s Spirit. When an opportunity to serve/share/make a positive impact/leave part of the world a little better than you found it, a disciple capitalizes on the situation more often than not. The Holy Spirit speaks through making opportunities visible, but also through that sixth sense that leads you to take the long way going to the store, makes you turn around to learn more about the stranger at the post office, or constantly reminds you of that old friend until you pick up the phone and call them.

Last, a disciple is motivated by God’s affirmation. As echoed throughout the Bible, motivation matters. A disciple is more concerned with the well-being of the ones they are serving than what can be gained through giving their time. I have crossed paths with individuals who become upset when their involvement in a project or act of service goes unrecognized. This attitude is contrary to the gospel and Christian discipleship. Most valuable to the disciple of Christ is not personal gain or praise from our peers, it is watching the reactions of those we’ve served and seeing the impact our presence made on another’s life.

Today’s drawing is a depiction of the Bible’s ultimate representation of servant-hood, washing another’s feet. 2000 years ago, walking was the most common form of transportation and the closest thing to Lebron James’s shoe line was some raw hide and leather straps (wait, that’s not so different). At any rate, the first century common citizen had nasty feet. Even today, showing the bottom of one’s foot to another in middle-eastern society is tantamount to flipping the bird in America. Just before giving himself over for torture and crucifixion, Jesus exemplified humility to his disciples by washing each one of their feet. The central focus of today’s drawing is the icon of the Gospel you may recognize from some previous drawings. The summation of the Gospel is simply this; Jesus lived, He died on the cross, He was buried, and He rose from the grave. Surrounding the Gospel icon is a circular arrangement of figures, each washing the feet of the one in front of them. You may remember from a couple weeks ago, this arrangement implies the Gospel is the central focus of the action surrounding it. In today’s image, it is the motivator for humbing ourselves and serving others.

A disciple does the right thing, at the right time, for the right reasons. Our role as the church in the missio dei is to create a community of disciples by living the example of that role so that we inspire others to follow.

While walking by the Sea of Galilee, he saw two brothers, Simon (Peter) and Andrew his brother, casting a net into the sea, for they were fishermen. And he said to them, “Follow me and I will make you fishers of men.”

2 thoughts on “The Cycle of Foot-Washing”