Grace. The ‘Why’ of the Incarnation.

As everything, He became nothing so that we could have everything. 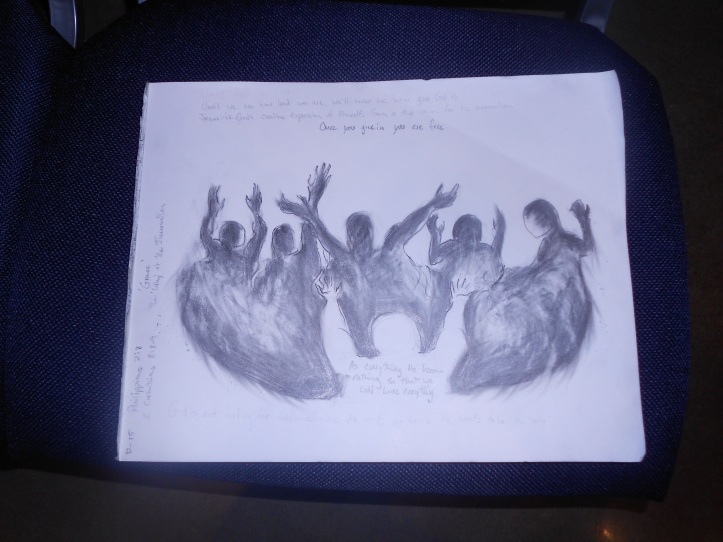 Nearing the end of our Upside Down Christmas series, we’ve tackled who Jesus is, touched on the when and where. Today we addressed the most important question. Why?

Jesus is God’s creative expression of Himself, His ultimate biological sculpture. Grace is the reason for the incarnation.

Before we go much further, what is ‘incarnation’? Incarnation is physical manifestation. In biological context, it is conception and birth. In spiritual context, it is the crossing of realms from supernatural into natural. In Christianity, it is both. Jesus, as a physical extension of God, was physically born. He became human while remaining God.

Why lower Himself to a human level? Grace. What is grace? Grace is defined many ways, based on context. Spiritually speaking, it is a virtue of God which provides for human sanctification. It is through grace that we are inspired to generously serve, to be gracious, to one another. Boiling it down, Jesus is incarnated by grace to provide an example for us to show grace.

Grace is an over-used term in modern “Christian” circles, not because it is an attribute that should be limited but because its actual definition has been so diluted that the word is misused. Grace is not synonymous with apathy, it is the apathetic’s antonym. Some will throw the word grace around when arguing the “proper” Christian position on certain, controversial social issues. Grace, without understanding is grease, creating a slippery slope of incomplete theology and leading people deeper into chaos.

Properly defined, grace inspires us to forgive people. Grace is the ability to let go of the past. Grace is our motivation to generously serve strangers.

Being a gracious person is not as easy as flipping a switch in you head. Being gracious is more than doing good things, it’s also keep your motivations in check. When your acts of generosity are limited to those whom you deem “deserving”, you are no longer being gracious. When you serve to build your reputation, you are separate from grace. When you are so frustrated by a lack of gratitude from the ones you are serve that you stop serving, you are bankrupt of grace. Motivations are more important than to God than actions. To understand grace, we must fist understand ourselves. God is not looking for obedience alone, He is concerned with our hearts and our intentions. Until we recognize how bad we really are, we will never recognize how good God is or grasp the concept of grace.

Today’s drawing is an image of incarnation, grace, and an ignorance to grace. The positive space shows several figures with their arms raised in worship. It is a rare occasion when I raise a hand in worship. For one, I can’t draw above my head well. Unless I am so moved that my body language speaks through movements like raised arms, I feel an awkwardness about physical expression, as if I’m not sure my motivations are pure enough to raise my hand. The figure on the right shares this uncertainty, with one hand raised and his attention directed below.

The negative space brings another dynamic into view. The white space the figures appear to worship wraps around either side of the page and back under the drawing. As the shaded area separates, a figure with arms laying outstretched toward the worshipers. This figure is the Christ, manifested in physical form but still fully God. The outstretched hands support the figures spiritually and physically. Of the figures, only the self-conscious character on the right notices this support. This figure includes a highlight on its face, an detail I included to imply he sees Christ. The others are all shadows, implying they are in darkness. Worshipers n darkness? Is this possible? Unfortunately, it is. Worship is only worship if it is expressed in genuine love. Your motivations matter.

If this Christmas is a season where you’re feeling lost in the bustle or a little depressed among the seemingly happy crowds, start giving. Don’t go emptying your bank account or washing car windows at stop lights, unless you feel so led. Start simple. Take a box of cookies to your neighbor. Call that friend you’ve lost touch with. Volunteer at a soup kitchen. Spontaneously start singing Christmas carols in the food court. Will it be awkward? Probably. Will it be easy? No, if it were easy, everyone would do it. Will it be worth it? Definitely. Doors to serve people on significantly deeper levels will begin open and you will find that the more of yourself you give, the more you are filled in return.

The parts of our life we will hold most dear are the parts we gave away. – Donald Miller

Who'd want this set in your family room?
Digital rendering
Outdoor accent chair on the drawing board for Memorial weekend
Mother's Day puppy stairs!
Completely sold on the colors and styles happening in Alden Parkes' showroom this market! Proud to have played a role in bringing these to life! #hpmarket #style #design #furniture
Guys night.