Following on the tail of the most tumultuous United States campaign and election season endured in my lifetime, Journey Church launched a series focused on the concept of honor. Delving into our understanding of what honor looks like, who deserves to be honored and the actual nuts and bolts of honoring another, these are the images born from our discussion.

Installment one stripped our understanding of honor down to it’s basic foundation; what is honor to begin with? Honor is respect, honor is admiration, honor is an active choice.

Our ability to honor the life, feelings and basic humanity of another person is capped by a dark ceiling of our own pride and ability to honor ourselves. One cannot treat another with a spirit of honor without first approaching the other with an attitude of respect. The most basic place to practice respect is within oneself. Honor requires humility, humility opens the gateway for service. To visualize this concept, I drew a dark ceiling. A figure who escaped this prison has opened a trap door, allowing light to explode into the darkness and reaching back through to show others the way out.

The figures still trapped inside are attracted to the light, but the ceiling is too high to be conquered alone. Each one must work together, building platforms to raise each other higher and build a structure each of them can climb together to freedom. 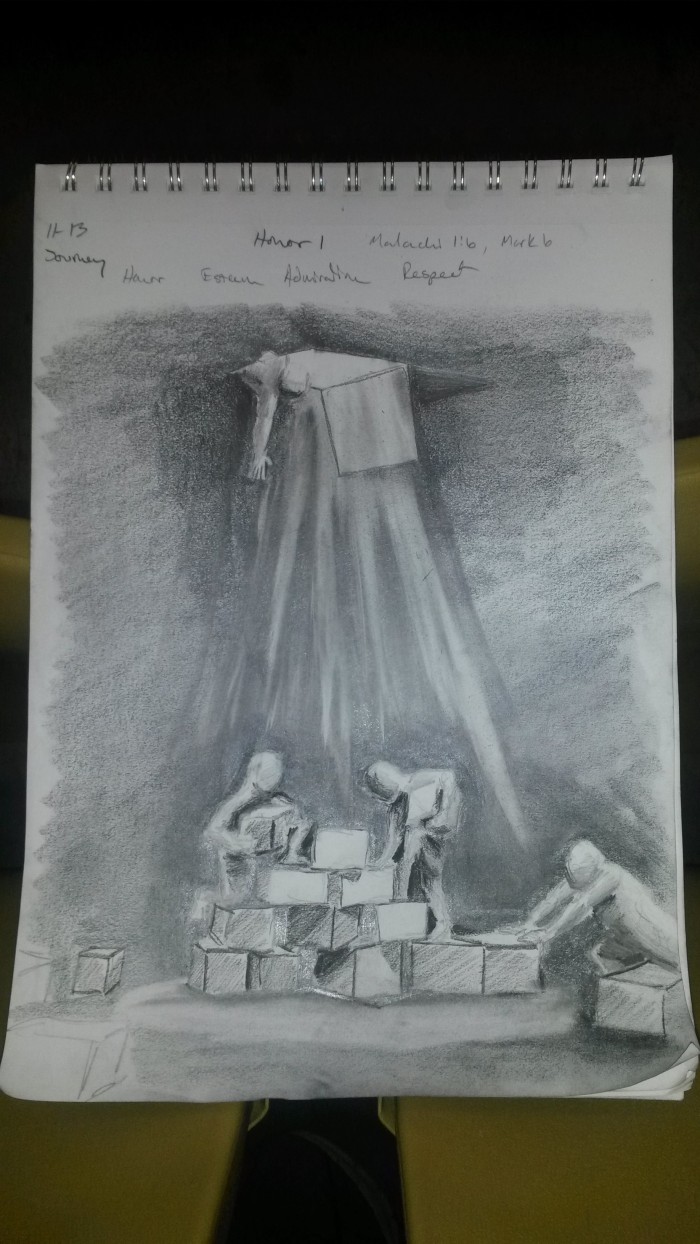 In the second installment, we tackled the question of who? Is it something we wait for another to earn, or something we spread liberally across everyone we encounter? Is there someone or something which should NOT be honored?

Who do we honor? Everyone and everything formed by our creator.

Honor is a gift we each hold in abundance, but must actively give. Honor does not give itself away. In this drawing, the hands of the Creator spread openly to support all of creation. From left to right, you see a politician at their desk (representing all leaders in our lives), a homeless beggar making their plea for help (representing anyone we could choose to help), a doctor (anyone who takes care of us physically, emotionally or spiritually), a family with small children (we are all one family on this planet), a soldier (representing anyone who fights for us; military, law enforcement, EMS), a disabled veteran (to represent all who sacrifice for us), a stoic tree to represent all of nature and the planet we inhabit. At the far right, peeking from behind the thumb, a figure in a Burka carefully leads a child to move beyond the tree and join the other figures while carrying a stuffed animal. I chose this image to represent refugees; those who don’t necessarily make us feel safe or comfortable reaching to, but need our help as desperately as any other. I skipped one figure, the one in the middle straddling the hands of God. This is you. The figure points back at you with one hand while holding an umbrella in the other. The open umbrella (decorated with HONOR) not only covers every person and human characteristic the figures represent, but also the one who holds it and the hands who hold them. Honor yourself, honor creation, honor others. In doing so, we honor God.

Finally, in entry three, we studied how to honor. How does a person honor anything? Is there a formula; a specific procedure?

The action of honor is a paradox. It is a very simple action, but also one of the hardest thing a human can do. Humble service. Humility is a hot word in the circles of churchianity. It is printed on t-shirts, waved on banners and advertised as the bare minimum expectation for acceptance into even the outer circles of organized religion. But humility is not just philanthropy or an altruistic attitude. Humility is loving another human being on a level higher than yourself, the willingness to let go of your own life for theirs and following through with your actions. Humility is authenticity.

When we honor another person, we place value on their life. This value is not just a feeling, it is expressed in a way that allows it to be transferred into the other, acknowledging and increasing their self-worth. We will only honor that which we value.

In thinking about how God wove honor into the fabric of life, I asked myself what service looks like. Visions of soup kitchens, volunteer firefighters and Habitat for Humanity building projects came to mind. Simplifying these all into a single icon, I envisioned a figure kneeling in a near-fetal position. The head is bowed and arms outstretched with their palms up. Another figure mirrors the first, kneeling and reaching in the same position. As the two reach for each other, their arms create an interlocking pattern. I lined these figures along a rolling patchwork landscape. Like the teeth of a zipper, this array of figures serving each other are united as the glue which holds their world together.

In the background, a pair of hands reaches through the sky to the flowing land. Holding cross-hatched fabric of life as we know it, these hands pull the figures together. As the arms connect, the land is binding together to form a mountain peak. The summit of this peak will point directly back to the one who is forming it, praising its Creator.

By honoring each other, we honor God.